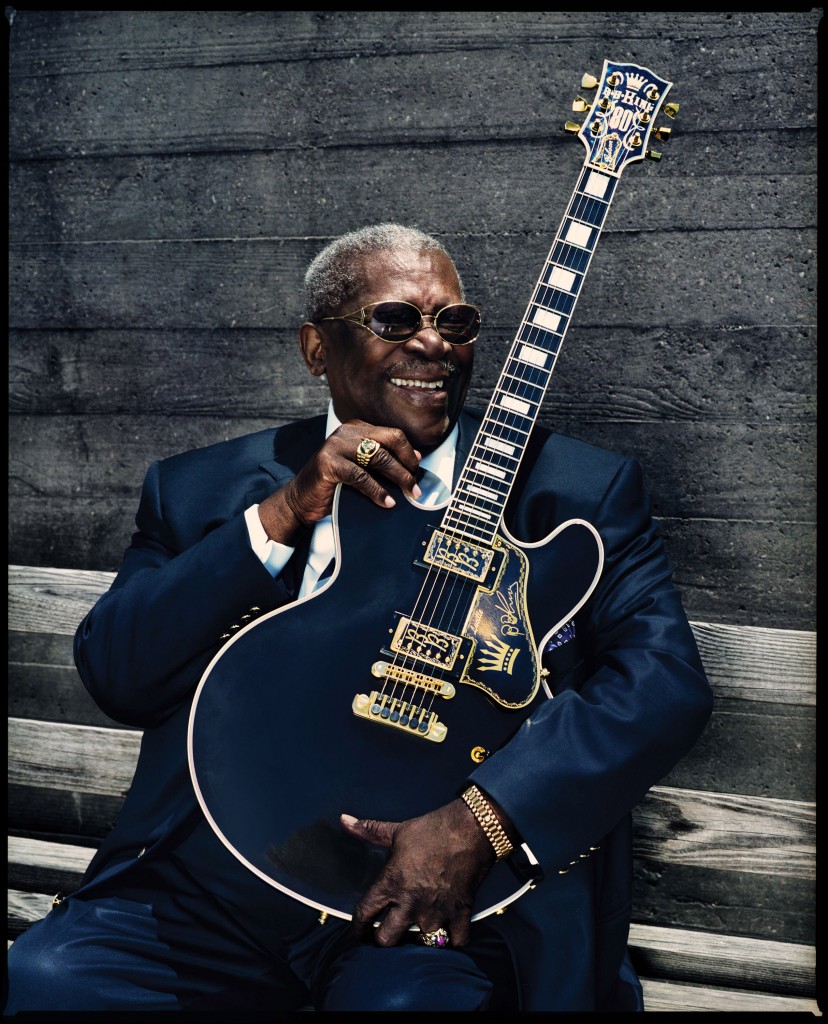 Please visit the official B.B. King website to learn how you can support and honor the King of Blues.

Riley B “B.B.” King, 89, of Las Vegas, NV, died May 14, 2015. He was an American music icon known worldwide as a leading electric blues guitarist and singer, known as “The King of The Blues.”

The winner of 15 Grammy Awards, the Presidential Medal of Freedom, the Kennedy Center Honors, and more, King leaves a legacy of influence on American music. Coming from the cotton fields of the Mississippi Delta, King remained true to the blues, and won millions of fans including the Rolling Stones, Eric Clapton, Buddy Guy and U.S. Presidents.

With his guitar “Lucille” strapped to his chest, he performed and recorded decades of musical hits like his signature “The Thrill Is Gone.” He was inducted into the Rock and Roll Hall of Fame in 1987 and was given a star on the Hollywood Walk of Fame in 1991. He is in the Songwriters’ Hall of Fame. In 2008 his hometown of Indianola, Mississippi, opened a $14 million museum to honor him.

King was born near Berclair, Mississippi on Sept. 16, 1925 to sharecroppers Albert and Nora Ella King. His parents split up when he was four, and his mother took him to Kilmichael, Mississippi where her mother lived. Riley’s mother died when he was nine and he lived with his grandmother until she died. At age 14, he was living alone on Edwayne Henderson’s farm, share cropping an acre of cotton and living on $2.50 a month (the equivalent of $42.50 in today’s dollars).  A white family allowed him to live in a two-room cabin behind their home. He did chores to earn his keep. He borrowed money to buy his first guitar.

He moved to a Delta cotton plantation outside Indianola where he married his first wife Martha and became a member of the local five-man St. John’s Gospel Singers. On Saturdays he would play blues on the street corner in Indianola and listen to accomplished bluesmen at the Club Ebony.
In 1947, he left the plantation for Memphis where he began his music career on Beale Street. He landed a job on WDIA Radio as a disc jockey and became known as the “Beale Street Blues Boy.” That moniker was later shortened to “Blues Boy,” then, finally, to “B.B.”  On-air he would promote his band’s live appearances in area nightspots. His first record was recorded in Memphis. In 1952, his first hit “Three O’Clock Blues” topped the Billboard’s R&B chart and his career took off.

During the 1950s and early 1960s, he and his band were mainly on the Chitlin’ Circuit, a network of clubs and theaters where black entertainers were allowed to perform. Travel was mostly in the band’s bus. But in the mid-1960s, B.B. King entered the mainstream as a wave of British rockers who were influenced by American blues music, exposed blues and B.B. to white audiences. He began winning new hearts and truly “crossed over” as he played in countries around the world.

His appearance on the live broadcast of the Ed Sullivan Show in 1971 in front of a national audience of 50 million was significant, confirming with the American public that he had arrived. ( When Sullivan introduced him, he proclaimed, “And now, from Indianola, Mississippi, the great blues singer, B. … B. … King!”  In the six-minute set, he sang “Just A Little Bit of Love” and a medley, “How Blue Can You Get” and “The Thrill Is Gone.” )

His albums came in a steady succession. So did the Grammy awards. In 1987 he received the Lifetime Achievement Award from The Recording Academy. He was a Kennedy Center Honoree in 1995.  He was awarded the Presidential Medal of Freedom by President George W. Bush in 2006, and the prestigious Polar Music Prize which has been called “The Nobel Prize of Music” in Sweden. His guitar is on the current Mississippi license plate.

He was an ambassador of the blues, traveling around the world, greeting fans from Moscow to Beijing to Sydney.

For over three decades he and his band returned to his hometown of Indianola and gave a concert for the citizens there. The small Delta town of 11,000 opened a $14 million museum in 2008 to honor its famous bluesman. The acclaimed museum tells the story of the one-time cotton picker who became an international music icon.

Biography provided by bbkingmuseum.org. Please consider donating to his legacy and museum.